A further development of CoJack is CoJackHydra. Here, the calculation and control system is combined with a new pressure transfer system (using a hydraulic joint), which consists of a water-filled high-pressure hose. The "hydraulic joint" replaces the pressure transfer ring between the jacking pipes, which usually consists of a chipboard or oriented strand board (OSB).

The amount of water in the hose is dimensioned depending on the project in such a way that the maximum possible jacking force is achieved while ensuring the necessary deviation ability. CoJack-Hydra allows for significantly higher jacking forces than conventional pressure transfer rings, especially in tight curves or in curve combinations (S-curves) in the jacking alignment. 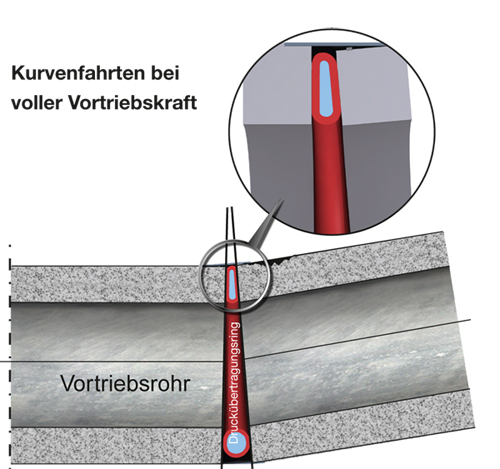 With CoJackHydra, the jacking forces at the main and intermediate jacking stations as well as the curved alignments actually driven are recorded by a special sensor system. These measured values are displayed graphically in a protected area of the internet together with the valid limit values. CoJackHydra thus not only enables higher jacking forces through the hydraulic joint, but also allows continuous control of the pipe stresses. 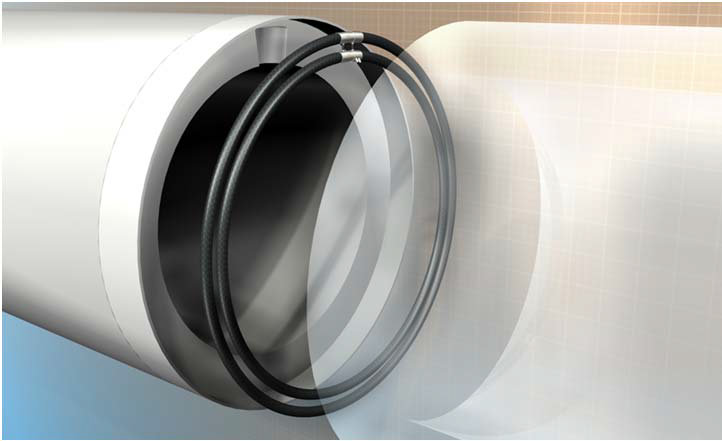 Hydraulic joint, consisting of one or two water-filled high-pressure hoses to replace the pressure transfer ring made of wood or chipboard

Requirement-related conditioning of the pipe joint

The pros shown in the Table above can lead to significant saving potentials for building contractors, in particular by a reduction of the number of required building pits and shaft structures through an increase in jacking length. When using longer pipes, the coupling times are reduced by about 20 %, while the number of steel guide rings is also reduced. The latter are very expensive and required for each pipe in order to implement a leaktight joint between two pipes.